Below is a smattering of work I've helped bring to life with my creative partner Lea Platz with the help of many talented creatives, web developers, experience designers, stratagists, production and account folk for my primary client at Publicis — Citibank.

Getting more girls in goverment. Who would say no to that? As a father to a Girl Scout and the only male on this team, I was honored to do my part in making some powerful work to inspire more women to consider goverment as a way to make a difference. It starts with a question was concieved, approved and produced within the span of 2 weeks, during the pandemic. A true cross country effort as it was shot during the pandemic LA while we sat in-front of our laptops in New York.

This couldn't have happened if it wasn't for our wonderful all Girl Scout cast and our amazing creative team at Publicis — Nicole Zielinski and Hannah Murphy, Deanna Solis, Chloe Grindle, our production by Rachel Tierney, and Directed by the ever talented and former Girl Scout herself, Øcean Vashti Jude.

For Citi Entertainment's music offering, we were tasked with trying to capture all the emotions of being on the cusp of great experiences. We collectively channeled our inner concert-goer to help devlop and activate a new positioning platform and the first creative campaign for Citi Entertainment — Designed for more once in a lifetimes.

It also didn't hurt that we were also developing Citi's first voice skill at the same time, so we were able to build very integrated campaign around both our talent in the Entertainment spot as well as have a line of sight into the vocal user experience of the voice skill to connect all the dots on this campaign.

For the second spot in our brand campaign we were asked to focus on Citi's Pro Camp offering. Pro Camps give Citi cardholders the chance to let their children train with their sports heroes — making their parents heroes in turn. We had the privilege to work with Dak Prescott, quarterback of the Dallas Cowboys, as he put on a mini Pro Camp of his own for us. The final, on-air version of Moved did not feature the VFX as intended, but it is available upon request.

For both spots, We had the privilege of working with outstanding dirctor Brian Beletic at Smuggler, to helped hone our vision and make magic out of it. Combine that with our fantastic DP Natashia Braier, our amazing editor Maury Loeb at P.S. 260, Alex Bickle from Color Collective and visual effect wizardry from The Mill, LA we made something really special. Topping this off was the simultaneous release of Zara Larson's unreleased track, WOW, to generate extra intrigue and ear worm recollection.

A special shout out to P!nk for letting us use her light wall and the rest of the Publicis x Citi team for backing and supporting this work, all the way to the front row, VIP.

With the arrival of Covid-19, Fraudsters began to change their tactis on how they take advantage. Citi's global fraud team, although on 24/7, was not a very well known offering in the consumer mindset. So, we looked to change that by inviting our customers to get to know fraud like we do, so they can better spot it themselves — helping the fraud team and customers around the globe fight fraud, together. 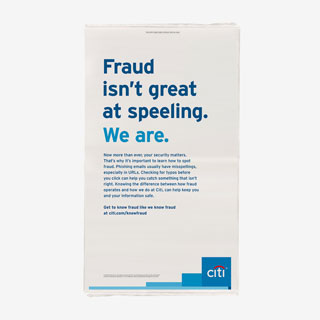 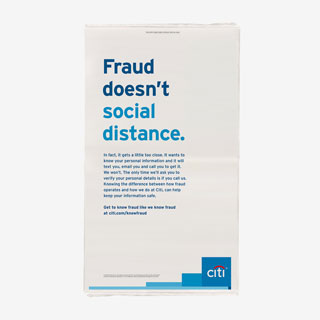 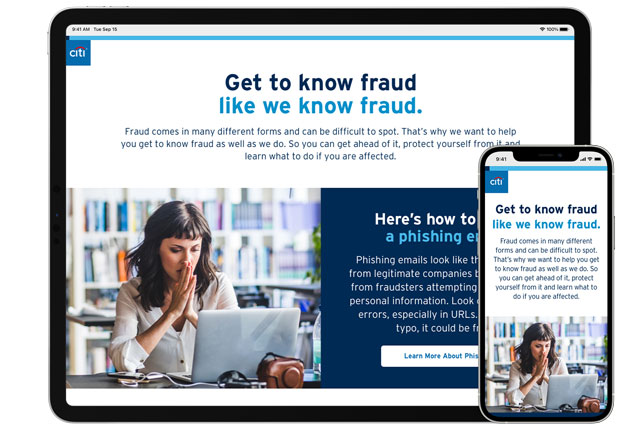 Canvas, Citi's beta testing community, has an ongoing relationship with Junior Achievement Worldwide — a global effort to build the foundation of tomorrows entrepreneurs. The more sign ups for Canvas, the larger the donation for Junior Achievement. To get the word out, we hit social media channels and tapped illustrator and animator Dirk Jan Haarsma to add the style and life we needed.

Starting in 2019, we were tasked with a branding and brand campaign push for Citigold. Visually uniting the US look and feel of Citigold with the APAC region, Publicis was tasked with merging both visual approaches and making this new Citigold achieve ADA compliant standards for the US (and global) market. We brought this to life with the On Your Terms campaign, where we allow Citigold clients to define their own versions of wealth management with all of Citigold's offerings. One of Citigold's most successful campaigns to date, this is an ongoing series of work that continues to deliver for our clients at Citi.

Both Glow and Hike were shot by directing team Joaquin Baca Asay and Lalou Dammond and VFX were done by A52. To date, the On Your Terms campaign continues to be the most successful campaign for Citigold.